Andreas is a musician and artist currently residing in Montreal, Quebec. He grew up in Bronxville, New York, and began taking piano lessons at the age of 8. He played saxophone in his high school band. At age 11 his mother bought him a guitar from an antique shop and he became instantly enamored with it, quickly learning the guitar licks of greats from the 60s and 70s like Jimi Hendrix, Jimmy Page and Duane Allman. Soon after he started playing in bands around Westchester and NYC and began writing his own original compositions.

Andreas enjoys playing many different styles of music including rock, jazz, classical and electronic music. Over the years he has played in a number of acts including the indie-rock act The Bad Sleep Well, the hip-hop act The Apostles and the art-rock band Icenine. Currently he writes and records an eclectic mix of rock, funk, jazz and blues with his act The Ever After. He also creates ambient downtempo electronic music as The Resident Alien. As a solo artist he enjoys writing classically themed folk-fingerstyle music on his classical guitar. His influences include Van Morrison, Wes Montgomery, Cat Stevens, Radiohead, Django Reinhardt, The Grateful Dead, Baden Powell, Charlie Parker, Aphex Twin and many more.

While largely self taught, Andreas has enjoyed studying with a number of great guitar teachers over the years including Nick Ditamasso, Marvin Horne, Paul Millette and Matt Baxter. He also studied Music Technology at McGill University in Montreal where he became well acquainted with the technical side of recording and producing music. 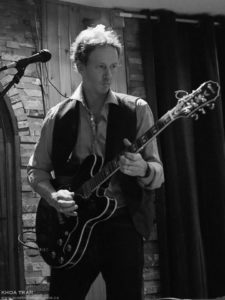 A few of Andreas’ notable achievements include:

With “Eh voilà!”, released in May 2019, Andreas (and the Ever After) exposes his love for many different styles of music: rock, country, reggae, jazz… as if to confirm his talent across multiple genres and languages.

Andreas is currently working on new music in his studio in Montreal,  where he also records and produces solo artists and bands. When not focusing on music, Andreas is most likely either just getting up or just getting down.